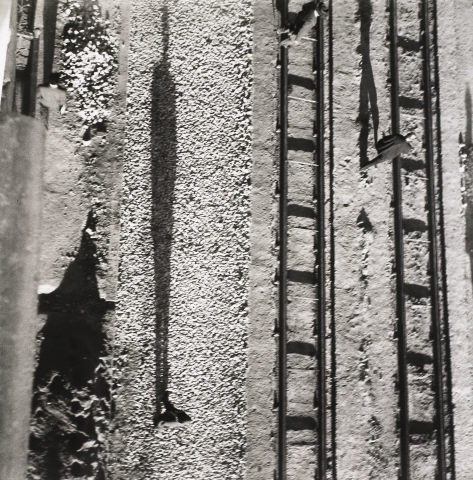 The power of this image lies in its graphic quality which, created by the oblique light, could have been captured at either sunset or daybreak. Indeed, in a more recent print of this same image for a 2004 retrospective of Fernando Lemos’ work in the Pinacoteca of S. Paulo, it received the title Pôr-do-Sol e Alvorada [Sunset and Daybreak]. The article ‘and’, instead of, for example, ‘or’, suggests a temporal simultaneity impossible in real time, but not in the time of the photographic image – subverting, however, its sense of a captured moment. This way, the title emphasises a temporal uncertainty associated with the ambiguity of its form, which opposes the image to one of its most important references: the order and legitimation of time. This uncertainty, as a strategy which deconstructs reality through observing it with a degree of surrealism, invites consideration of the specificity of processes of meaning and the active role of the observer.

This image by Fernando Lemos could well serve as an illustration of Delfim Sardo’s contention that: ‘Landscape is not, however, what exists in our field of vision, but the result of bringing our gaze to bear on what is in front of us, the area of visibility’,* emphasising the interpretation of landscape as a notion intimately associated to a cultural construction.