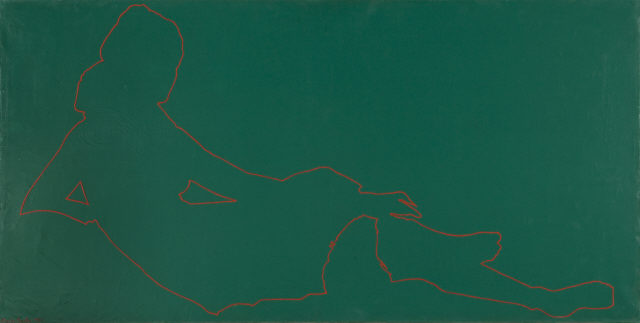 Dimitri Salmon* wrote that this work was a homage to one of the “grand ladies” of a museum (the Louvre) that Lourdes de Castro visited frequently when she lived in Paris from 1957 to 1982, and that it transforms the work of Ingres into a sign or form and that, by reducing it to an outline, eliminates the figure depicted, so that all that remains is a silhouette.

La Grande Odalisque is one of the most iconic works of the French painter Ingres (1780–1867), and in the history of art it has been a source of inspiration and citation for countless artists. It is the portrait of a nude woman surrounded by cloths that drape, slide and cascade in folds: traces of movement appealing to the sense of touch. Above all, they frame the sensual, curvaceous body of the woman, who lies reclined with her back to us – and what a back it is – yet gives us a sideways glance, conscious that she is being observed.

“The shadow is still palpable, but the outline is not. The outline surprised me because it did not exist before I drew it; I think that it represents a new look at my surroundings. I found the shadow projected as an outline much more interesting than depicting it in a straightforward way. Because the outline of the shadow is ghostlier, more fugitive, and even more absent. While an outline is something that has been made using the presence of the shadow, but it breaks free of it. The outline suggests real and absolute absence. For me, it means moving even further away. The outline is the least that I can have of something, or someone, while still preserving their features.” **