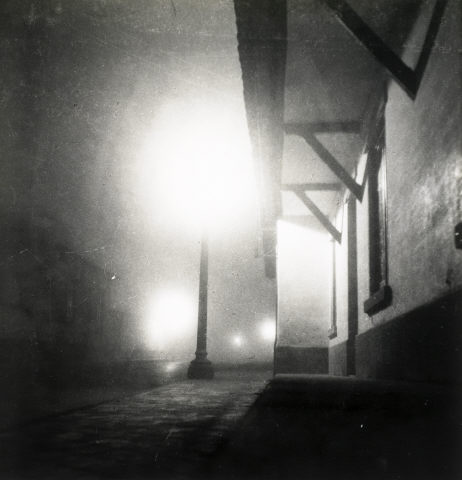 Moledo do Minho is a town close to Caminha which Fernando Lemos visited from time to time, to stay with António Pedro, an older friend and fellow artist who left Lisbon for the town in 1950.

The frequent sea mists were the subject chosen for this image, who clearly saw the mysterious glimmering potential in their nocturnal manifestation. Indeed, the luminous aura cast by the street-light in the foreground, and the solitary quality of the space punctuated by other spots of light which fade into the mist, suggest the potential transfiguration of a setting, with the fantastical and mysterious elements indicating a dreamlike and surreal narrative dimension. This narrative however is suspended by the singularity of the image, which seems, perhaps, to be awaiting the entrance of a human element, of drama, revelation, action.

It could be said that in this image Lemos has merely prepared the stage, through opening the shutter curtains of his camera.