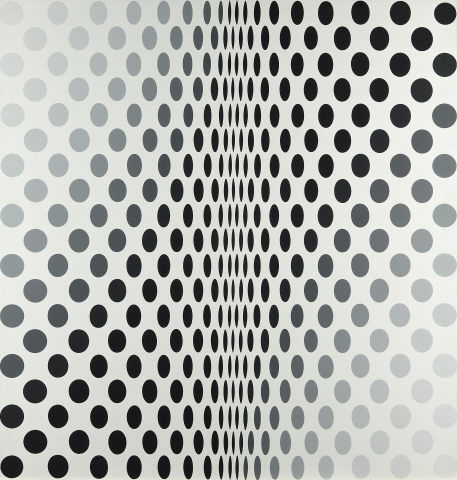 Perhaps the most important concept in understanding Bridget Riley’s work is “the consciousness that the equilibrium within a rigid structure could be disturbed and then restored.” In illustrating this idea, linked to the non-rigidity of geometric shapes (a concept that defies common sense), Riley likes to evoke the experience of a heavy rain shower in the summer of 1960, in Venice, when the rain, falling onto the black and white tiled paving, seemed to dissolve the uniformity of the stones, which became sharp again once they had dried.

In Metamorphosis, Riley works on a level of optical ambiguity, generated in the observer by the suggestion of progressive movement and the luminous effects of the grey circles – worked in continuous tonal progression from dark grey to the palest grey –, impeccably outlined on the continuous field of the immaculate white background. In Riley’s painting there is no mathematic element, despite our being faced with a geometric abstraction. We find no direct mark from the hand of the artist, who since 1961 preferred to entrust the execution of her paintings to assistants, reserving for herself the task of preparatory studies for the works and the cutting of shapes used for masking the outlines of her dynamic structures.

Despite coming from a rigid structure, orchestrated to the millimetre – in which the place and function of every element can be determined only in relation to the overall structure –, her work interacts freely with the observer, in a pictorial application of Stravinsky’s phrase: «The more art is controlled, limited, worked over, the more it is free».*