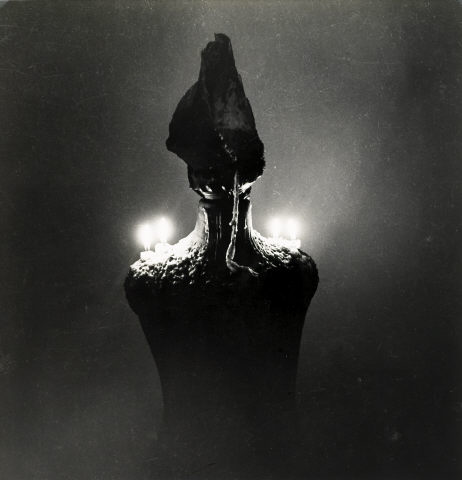 This picture is a photograph Lemos made of one of the intervened mannequins Marcelino Vespeira showed at an exhibition in 1952 (Casa Jalco, Lisbon). Part of the collection of the CAM (O Menino Imperativo, 1952), this mannequin, whose head was replaced by a conch, is the only one to have survived to the present day.

The ghostly aspect of the mannequin is perfectly captured in this image. Lemos used the candles on its shoulders, which were part of Vespeira’s intervention, for lightning, obtaining a back light which simultaneously reveals and conceals. Thus, the mannequin seems to be suspended between two worlds – that of light and shadow, of the living and the dead, of recognition and strangeness.

Today, candles do no longer light the mannequin. Placed in a museum, it suggests a body embalmed by time, traversed by dried streams of wax that witness from a brief life, captured in this image by Fernando Lemos.