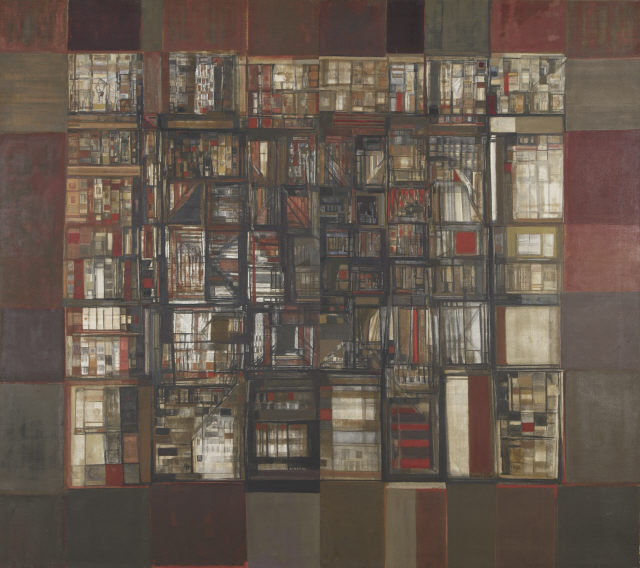 In this work, Vieira da Silva addresses one of her favourite themes, that of the library. From early on in her career, various subjects periodically re-emerge – though in different forms rather than as part of a series – and are tackled, re-engaged with, developed or metamorphosed in multiple directions. Vieira da Silva always referred to the importance of the library of her maternal grandfather, in the house she lived in between 1911 and 1926. Educated at home, in an adult world, imagination and books became powerful allies for the solitary young Maria Helena in her discovery of the world. The library, and its magical character and concomitant mystery, have a permanent and fundamental place in the life and work of the artist. A symbolic space and an important reference, she depicts the library countless times as an identifiable structure and as a metaphor for the universes it brings together. However, an understanding of Vieira da Silva’s work cannot be restricted to a simple iconographic analysis. Her chosen themes, which re-emerge over time, do not in themselves interfere with the essence of the work: a chessboard or a city are equivalent to a library, a station platform or a shelf in her investigation of space and in terms of orienting her imagetic world.

As early as 1949, a first Biblioteca constituted a landmark in a new kind of spatial conception which recreated classical perspective using a multiplicity of vanishing points. In a different exploration of the definition of space and in a much more mature phase of her development, La bibliothèque en feu (The library on fire) is another notable example of the structuring of space. The grid tends to replace perspective – recurrent structural elements in Vieira da Silva’s work – and the design highlights the two-dimensionality, the physical essence of painting. Like the other structural elements, the large size of the canvas has also been considered. The surface is imperceptibly stitched together from top to bottom, in a vertical running dead centre down the painting, uniting two equal parts. A grid occupies the whole surface and is given a different pictorial treatment in the smooth squares of the frame, becoming more elaborate and graphic within the painting. The painting is divided into apparently regular surfaces, with the squares of the central section being subdivided in two or four. The grid merges with the small squares and their regular and ceaseless rhythm. The luminosity and the different treatment of the centre and the exterior produce a darkening of the central section, suggesting depth and concentration of space. Each zone has its own organization and dynamic which, with the instability of colour and light, emphasize the importance of the boundaries. With notable skill and attention to detail, each line and brushstroke is carefully orchestrated to obtain an effect of illusory, merely pictorial depth. Colour plays a fundamental role in the space particular to each territory. Associated with fire, red is the preferred colour of Vieira’s libraries, suggesting a certain intimacy and evoking interior spaces.