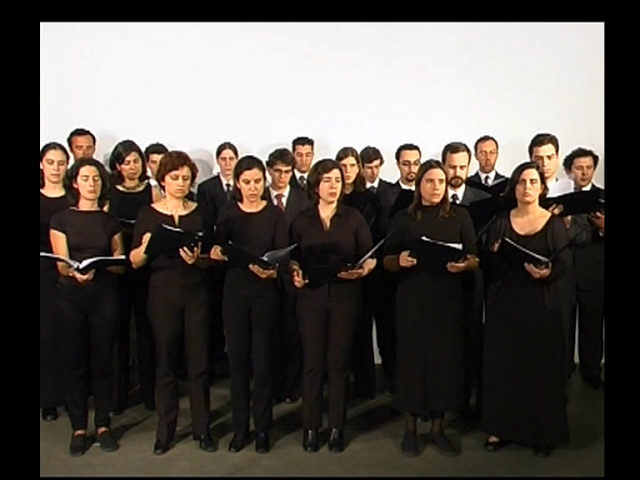 In Instrumental Version (2001), an a capella choir interprets the “The Robots”, composed by Kraftwerk and featured on their album Die Mensch Machine/The Man Machine (1978). The Germanic band, considered a pioneer in European electronic music effectively explored sonorities obtained through the extensive use of synthesisers, and combined it with a clean visual image, reminiscent of the echoes of a futuristic aesthetics. Kraftwerk’s original theme is a musical dramatisation of the issue of machines and the transformation of Man into a machine; it is fed from the repetition of electronically programmed sounds, from affection-free gestures, from the idealisation of a flawless super-humanity, free from indeterminations.

With the recontextualisation of the theme “The Robots” as an a capella choir, a paradoxical return of strictly human emotion, tonality and warmth occurs, through the action of the singers’ vocalisations without text support. This inversion occurs in this and other works by João Onofre, as a way of questioning – though the time progression allowed by video – certain cultural coordinates, namely the effect of a mixture of aesthetic (in this case, musical) references, marked here by the interpretation of a theme (and of a style that, still today, is acclaimed by numerous fans of the “electro” style), by interchanging contexts.

In João Onofre’s proposal, the arrangement of synthesised music for human voices, forces singers, throughout the nearly seven minutes of the video’s duration, to a repetitive and functional execution of the vocalisations, as if they were automatically programmed music (as suggested by Kraftwerk’s original lyrics). Finally, the adaptation of a popular electronic work for a choral orquestration with historical traditions, demands the verification of the conventional/institutional character of values and symbolic hierarchies associated with certain musical genres, for example, as well as to the dependence of these hierarchies in relation to their spatiotemporal production contexts. Instrumental Version is, as the name indicates, an inversion itself of musical registry, not necessarily instrumental but vocal, though wordless. In this work the Choir of the University of Lisbon was filmed with a still camera and a frontal view, thus neutralising the poetic or visual effects external to the “action” itself. The twenty singers were conducted by maestro José Robert, the absent figure of this set, though present in the furtive glances of the singers beyond the scene, while they simulate the reading of non-existing music sheets.

João Onofre is a visual artist. He studied at the Faculdade de Belas-Artes of the University of Lisbon and at Goldsmiths College, University of London. The video becomes from early on his main art form and it is with works made in this medium that he has participated in important international events connected to performance and video art. Musical and sound references are important in work, as are the fusion and the interaction of symbolic references from the universe of film, theatre, dance and fashion.