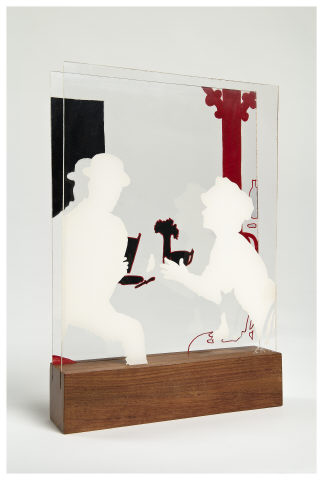 In the Café denotes a turning point in Lourdes Castro’s shadow work, as she began painting projections of silhouettes of friends on canvas. In 1961, her artistic career had already undergone a profound change. If up until this point her production had affiliated itself with an abstractionism influenced by the post-war School of Paris, she eventually abandoned the traditional media of painting. At the same time, she incorporates the inquiries of Nouveau Réalisme and neofigurativism into her work, to which she added her interest in shadows in a series of screen printing experiments for the KWY magazine. She then produced objects through assemblage of everyday items and then moved on to working with shadow, a problem around which her work began to revolve. In this way she solved one of the problems facing artistic production of the 1960s, consisting of ways in which to appropriate and artistically express elements of reality and everyday life. As a result of the discovery of plexiglas, in 1964, she abandoned painting on traditional media altogether.

In the Café consists of two sheets of plexiglas, which being separated, accentuate the distinction between the two different planes of representation. On the first, we find the projection of the shadows of the characters, and on the second, the silhouettes of the elements which frame the space, delimited by the patch of black on the left and the red pillar on the right, in which the figures in the foreground interact. Thus we see a scene where the female figure is shown actively approaching the male figure, apparently passive in the act of reading. The work with shadow is made more complex by the relationship between the two planes, since the silhouettes of the sheet closest to the viewer are projected onto the plane which defines the background of the scene. Note also the use of negative shadow to create the cat in front of the female figure in the lower right corner. Here, Lourdes Castro explores the use of outline to complete the design of the cat and the back of the chair. This game between the outline and the patches of colour is continued in the table and the objects that occupy it, as well as in the book held by the male figure, the black area produced by the shadow projected from these elements being outlined by a red line. This same method is used in the upper right corner on what appears to be a bottle, its interior now becoming grey.

This complex work condenses part of Lourdes Castro’s research on shadow and the idea of making absences present, stimulating a reflection on time and memory expressed in the use of outline instead of areas of colour. In addressing the issue, the Álbum de Família should be consulted, a set of volumes that has been composed by the artist, as a compendium of images, text excerpts and thoughts about shadow.