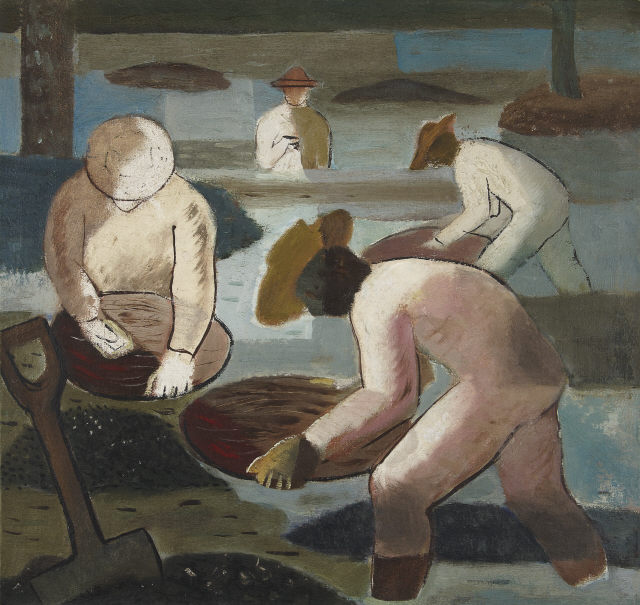 With the rise to power of Getúlio Vargas in the wake of the 1930 revolution, a new headquarters was commissioned for the Brazilian Ministry of Education and Health in Rio de Janeiro. The architectural project was led by Lúcio Costa, with a team made up of names such as Niemeyer and Le Corbusier, and the decoration was entrusted to a young artist, Candido Portinari, who had recently been awarded a prize in Philadelphia. His paintings of rural work and daily life in the shanty towns of Rio de Janeiro were gaining public recognition, and his mythification of the work of the Brazilian people was cherished by the prevailing political ideas.

Portinari was charged with painting a series of frescoes depicting, in twelve chronological episodes, the economic cycles of the country since the arrival of the Portuguese: brazilwood extraction, cane cultivation, cattle breeding, prospecting, tobacco planting, cotton, Paraguay tea, coffee, iron smelting, and rubber and canauba wax extraction. Between 1936 and 1944, the painter engaged in exhaustive preparatory work, accumulating around three hundred previous studies, done using different techniques, and travelling the country from top to bottom to familiarise himself with the places, contexts and protagonists of his narrative. For Garimpeiros (estudo para mural) [Gold Diggers (study for mural)], he travelled to Ouro Preto and Mariana, in the state of Minas Gerais, the site of the vast precious-stone exploration campaigns.

In order for his painting to reach and exalt the people, Portinari knew that he could not isolate himself in avant-garde experiments which were only of interest to an elite. For this reason, he took inspiration from recent Mexican work by Rivera, Orozco and Siqueiros, and chose the format of the mural, the medium best suited to social art due to its capacity to resist everything and be available to everyone. Nevertheless, the formal arrangement recalls the lessons of the Italian Old Masters, who he had studied diligently, in the way that, with a keen sense of synthesis, he rationalised the space at significant points, where all of the detail exterior to the work was eliminated. In this narrative, there is no room for politicians or great national figures. The protagonist is always the figure of the exploited peasant, which reveals the painter’s dual purpose: to recover the historical past in order to undertake a discourse on the present. Although he respected the dictates of socialist realism preached by Louis Aragon, in that he elevated the figures above the landscape, his subjects, however, remained reified people that lacked identity. Work was the only social value that slaves possessed, a fact which Portinari made very clear by drawing their hands and feet disproportionately large.

The study makes it possible to follow, step by step, the process by which this magnificent anti-epic was constructed. It was Candido Portinari’s interest in the meaning of historical events, rather than perfunctory and uncommitted descriptions of them, that confirmed him as the greatest herald of his time. In effect, only a few years later, he was invited to stage a solo exhibition at MoMA and received a commission for two murals for the Library of Congress in Washington.