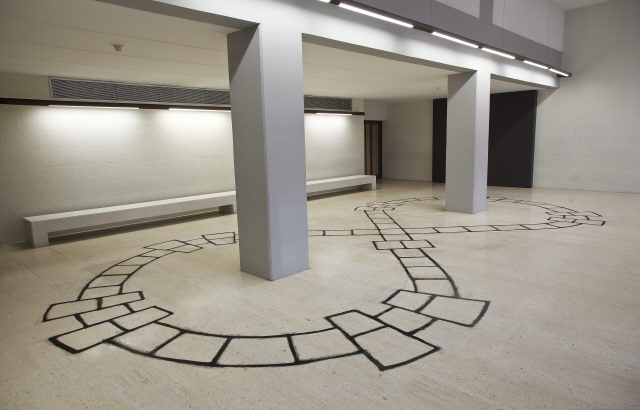 Future will be a remake

Artist or architect; architect and artist. This duality runs through the work and approach of Didier Fiuza Faustino and, over the years that he has been working, it has become clear that he is not interested in establishing whether he is one thing or the other, but rather seeks to work at the interstice between both areas and practices.

Future will be a remake is the result of a solo exhibition of the artist's work at CAM in 2011, and is what we normally call a site-specific installation – that is, a work created for a particular site. In this case, it is the space in front of the entrance to the temporary exhibition gallery and multipurpose room of the museum.

The piece consists of a drawing on the ground in black oil pastel, joining together the two structural columns at this point of the building. It is a type of continuous Möbius strip, without beginning or end, without past or future, a kind of endless hopscotch that invites the viewer to jump from number to number, in a double circle. If they were to do so, this would surely create a feeling of confusion, if not dizziness and lack of orientation. The title, with its allusion to remaking the future, is equally disorientating and disconcerting. How can we reset or redo something that has not yet happened?

Disorientation versus transparency, fragility, dizziness, hitting against the column – these are all ideas, states, sensations and oscillations evoked by Future will be a remake.

Faustino has written of this work: “Future will be a remake is a game that invites people to appropriate architecture through the act of play. Drawn on the floor, an endless hopscotch creates a new trajectory enabling the body to occupy space in a temporary and unusual way. In the basic form of hopscotch, life is seen as a simple ascension from the earth to sky, from hell to paradise. A game where life is ending in the rest frame, a simplification made in fake innocence. Once the visitor takes a step in the new version of the hopscotch, his body is taken into the infinity of roving. Life is fast and asks for infinite mobilization. Through repetition of a hypnotic movement, the visitor lets himself enter a mental world, a new space with infinite dimensions. No more earth, no more sky, no more up and down. Only a virtual area physically travelled”.