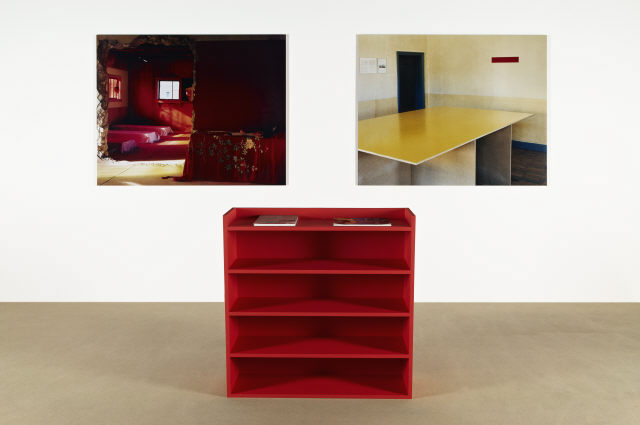 A research of a post-colonial penchant has been increasingly orientating Ângela Ferreira's work. She mainly asserts this interest by connecting the work of artists and architects, interested in the way Modernism works out when taken away from a Western context. Her fascination in adapting this aesthetic to different cultural, political and religious stories, would culminate, to wider public recognition, in her installation for the Venice Biennale (1997) when she took over the projects for the maisons tropicales that had been drawn by the French architect Jean Prouvé for several African countries.

These two photos trace back to 1996, showing Ângela Ferreira's installation at the Chinati Foundation in Texas, where the minimalist artist Donald Judd (1928-1994) lived and worked. In that space, she recreated the interior of Helen Martin's house (1897-1976), the exponent of outsider art in South Africa, that redecorated her own abode all through life with fanciful sculptures and objects made of glass and concrete, only helped by Koos Algas, a black assistant whose proximity was not well regarded in those days of Apartheid. Ângela Ferreira would repeat this form of memorial in the following year, in the series Double Sided II, when visiting Helen Martin's village in Nieu-Bethesda, South Africa, and creating there an installation based on Donald Judd's architectonic studio. Closing the circle of this artistic-architectonic relationship, she laid two books over the banal wooden shelf, for public instruction: one about the well-known Owl House of Helen Martins and the other on the architecture of North-American artist Donald Judd*.