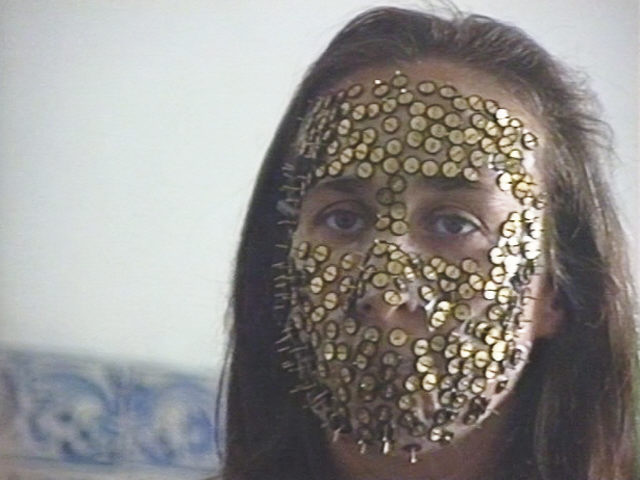 Although it is a video by Ana Vidigal, who has made her name primarily as a painter since the 1980s, Domingo à Tarde functions as a key to all of the artist’s work, revealing her practice, methodology and process.

With an avowed home-made quality – filmed with a fixed camera, occasionally out of focus, and white-and-blue tiles in the background – the video shows the artist doing a number of things to her own face. First she covers it in a double layer of adhesive tape, before adding pins, plasticine, and then wrapping it in a transparent plastic bag. Finally she shows it reflected in a mirrored surface which deforms and transfigures it, with the help of her hands and a series of expressions and grimaces.

These images echo the work of Martha Rosler, Bruce Nauman, Helena Almeida and even Francis Bacon. However, they are never inferior imitations; they demonstrate an awareness that the artistic act is always a kind of deepening, or a step forward, or sideways, from what has been done by other artists. These artists may or may not be figures from the distant past; in the case of Vidigal, her work is informed by the more recent past – 20th century art – from modernism to pop art, via the use of text and the corrosive irony of conceptualism, as well as the dismantling of the iconography of the media world wrought by feminism.

Self-representation, self-referentiality, collage, overlapping, transparency and the use of everyday materials are all elements that feature in Vidigal’s work, and are all present in this video. However, we also see the creation of a kind of mask or armour that simultaneously protects and alienates (if we were to come into contact with that face, spiked with pins, we would hurt ourselves).

The sequence of actions shown in the video has an element of self-harm, and at one point we even fear that the face will suffocate within the plastic bag. One year later, the artist used stills from this video, adding text to them to create a new piece of work with an illuminating title: Tornei-me Feminista para Não Ser Masoquista (I Became a Feminist so as not to be a Masochist).