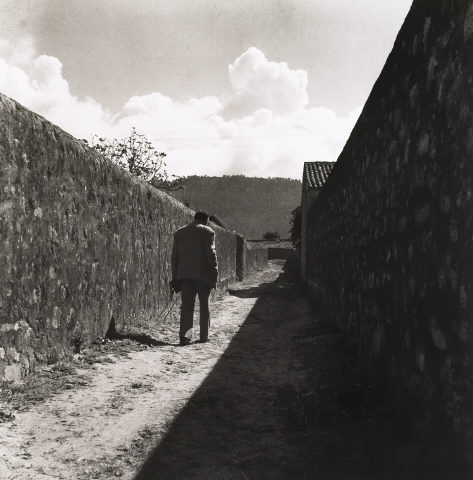 ‘When the theatre director and student António Pedro da Costa learned [Fernando Lemos] would leave for Brazil never to return, he left walking straight to the outskirts of the city. I’m going to cry at the mill, he said.’ Thus Diógenes Moura recalls an episode of Lemos’ departure from Portugal, in the exhibition catalogue of the 2004 retrospective in the Pinacoteca of S. Paulo.

In fact, the artist’s farewell preceded the moment this photograph was taken, near Pedro’s house in Moledo do Minho. In the picture, the narrative imagery, graphically supported by the lines of chiaroscuro leading along the walls to a vanishing point, complement the above-mentioned description.

António Pedro is directing himself pensively towards this central vanishing point which, being in the centre of the image, is as well a place of disappearance and dissolution.