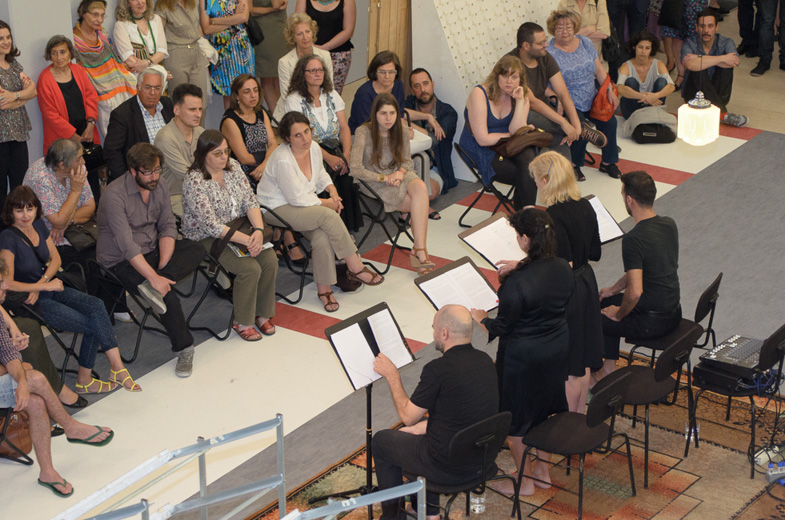 André Guedes’ AIROTIV was made for an exhibit at the Montehermoso Cultural Centre in Vitoria, Spain, as the outcome of a research residence in Christchurch (New Zealand), with the collaboration of a local art structure, The Physics Room, and the Portuguese publishing house Braço de Ferro that issued The Airotiv Papers, a booklet featuring archival images of New Zealand during the 1930s crisis, and a re-edition of four texts by authors from that country: Violet Targuse’s Rabbits (1932); Tony Simpson’s The Sugarbag Years (1974); John Thomson’s The Heyday of the One-Act Play 1930-1945 (1984); Ian Steward’s Port Supermarket Checks Out (2008). This latter, a newspaper article, reports the event which triggered the project: the closure by bankruptcy of the only supermarket in the port town of Lyttelton, a gateway to Christchurch once bustling with boats and people, and currently in a steep decline.

Facing a period of global economic crisis – the title anagram, AIROTIV, refers to the place of research in the exact antipodes of Victoria, where it was shown, – this project emerged in the year when the possibility of “recessional aesthetics” came about, and its effects on the arts were probed.* Both anxieties run through this project, thus imposing a variation on the artistic strategies of André Guedes, whose assembling of objects and archives from offices or other bureaucratic spaces, transforming the non-places into sets for performance and theatre, finds a stronger political tension. This installation made with objects taken from inside of the evacuated building in Lyttelton, like post-industrial ruins, combine the supermarket’s racks and shelves, with carpets and light-bulbs acquired in a 19th century antique shop, and tables displaying local newspapers from that year of 2009, reporting cases of danger experienced by this village in recession. The scenic apparatus, somewhat aseptic, of these found objects, therefore doesn’t replicate the conceptual legacy of struggle against the commodity and spectacle in art. On the contrary, it keeps the structures of supermarket aisles – those temples of consumerism – and takes up a subsequent point of departure, in seeking to counteract the collapse of communitarian models following the socioeconomic crisis on a global scale with a participatory platform, a relational aesthetics which uses fragments to envelope the visitor in the performance, combining precariousness and dramaturgy.

Adding to the physical dislocation of objects and stories to their antipodes, there is a temporal leap in the narratives harking back to the historical moment of the 1930s economic crisis (see above mentioned study by T. Simpson), by means of a literary genre spread in that context, the one-act plays, when theatre, deprived of professional companies, was maintained by low-budget amateur groups (see above mentioned study by J. Thomson). With a weekly intervention of four amateur actors, the remains of the defunct supermarket are then re-contextualized by the mise-en-scène of a feminist one-act play, Rabbits by Violet Targuse, around the character of Maggie Blake, whose angst-ridden, solitary existence in the plains of New Zealand in 1930, mirrored by her son’s caged rabbit, is spent in vain while yearning to escape from a life desolated by recession.

Hinged on the relationship between Victoria and AIROTIV, the Basque Country and New Zealand, which reinforces the global emergency of a crisis and the haunting eternal return of historical precedents, this project advances social settings and interactions which privilege the visitor’s role, by means of incorporating a theatre play, an idea of community for the days of financial depression when the space-time horizons shrink. “The things of AIROTIV, which we can now observe,” as André Guedes wrote, “don’t necessarily express the difference of that place; on the contrary, they represent a series of coincidences, repetitions, and events which we recognize. These elements are documents of things which happened in the beginning of the 1930s, and which have happened again, now. Indeed, AIROTIV is where we find ourselves in this very moment.”**

** Brochure published on his solo exhibition at the Montehermoso Cultural Center, Vitoria-Gasteiz, Spain, in 2009.