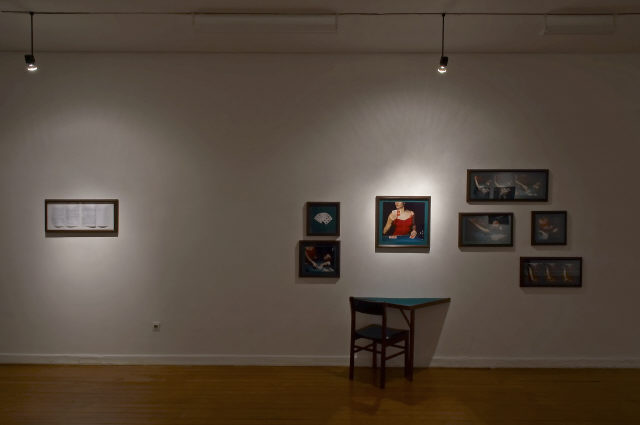 A Hand of Bridge

The title of this installation by Vasco Araújo refers to a Samuel Barber’s opera, A Hand of Bridge (1959), in which two couples play a game of Bridge whilst exchanging short monologues about issues of their daily lives. The interior bids take form and intersect with the formal rigidity of a game developed in the mid-nineteenth century. According to John Welchmen, in Vasco Araújo: Towards a sum of the arts, “[t]he location of Bridge at the intersection of pleasure and reverie, on the one hand, and structure and imagination, on the other, as well as its use of two key types of codes and signs (natural or indexical, and abstract or arbitrary), clearly appeal to Araújo’s aesthetic and formal interests.”

Starting from the notion of Flanêrie d’interieur, developed by Miwon Know, Vasco Araújo reflects the density of interior space in which narratives, identities and meanings develop. Their expression is reflected in minimal coded details, in the contacts established during a game of Bridge. Two pairs of players, two couples, four people, two men and two women, sitting face-to-face around a card table, relate to each other through the rules of a game that entails, in the way the artist selects, circumscribes and photographically cuts out specific moments of that same game, the visualization of other codes and psychological tensions.

The installation is composed by four sets, each one corresponding to the position of one of the players, constituted by half a card table, a chair, photographs and framed text. An affective landscape is established by the game, between drives and the control of gestures, mirroring the confrontation between four inner realities fed by desire and the will to seduce. Here and there, the latter manifest themselves in a look, in the gestures drawn by hands, legs, feet, a touch, through the way the objects are disposed – the carts, the wineglasses, cigarettes, the shoe –, and in the orientations imposed by the framed text. The game of Bridge is, thus, a stage or micro-system in which Vasco Araújo rehearses situations that shape a social performance within a specific situation, whose wanderings follow the labyrinthine trail of convention.