Why do dragonflies and damselflies have such big eyes?

No summer stroll is complete without spotting colourful dragonflies or damselflies on their fast and somewhat erratic flights.

They are admirable animals for many reasons. One is their fascinating eyes which are huge in relation to the rest of the body.

“The optic nerves of dragonflies and damselflies are very well-developed and they have many more of them than we have which gives them excellent vision,” explains Albano Soares, naturalist at Tagis – Portugal’s Butterfly Conservation Centre and at the Network of Biodiversity Stations.

The 64 species of dragonflies and damselflies that occur in Portugal “are visual animals, basing their life on sight,” explains Albano Soares, who has been working with these species for 20 years.

Unlike butterflies, dragonflies and damselflies do not seek chemical messages, such as pheromones, emitted by other insects and picked up by antennae. It so happens that their antennae are very short, depending on their vision and the ability of their brains to process visual cues, hunt, get around and look for mates.

“They are predators that easily detect movement,” particularly that of small insects such as mosquitoes and flies, explains Albano Soares. Their huge eyes give them the visual acuity required to capture prey, even in flight, in the case of dragonflies. They usually have better-developed eyes than damselflies, animals that hunt perched insects.

“For example, the blue emperor dragonfly (Anax imperator) has especially large eyes,” says the expert. This dragonfly, with bluish-green eyes, is one of the largest in Europe and can be found throughout Portugal. 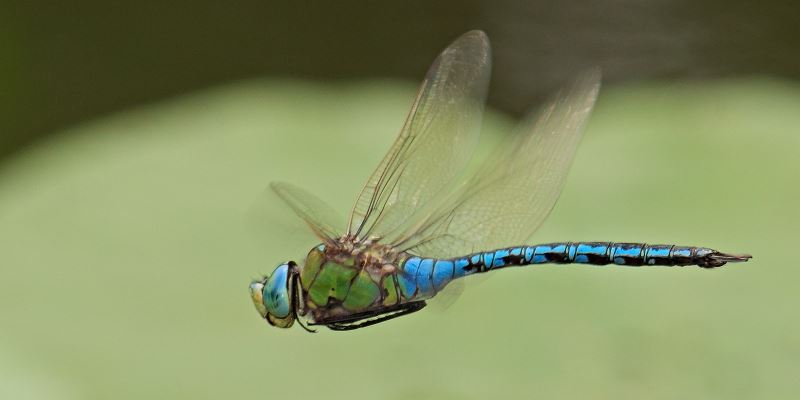 In addition to hunting, the sex life of these animals is also based on sight, specifically, on colour. Males are different colours to females and it is by colour that males identify their potential mates.

However, there are some species of damselflies that have adopted an interesting strategy. “Some females of this specie have masculine colours, a way to mimic males and thus avoid being harassed,” explains Albano Soares. This strategy allows them to live longer as they suffer less wear and avoid greater exposure to predators during breeding.