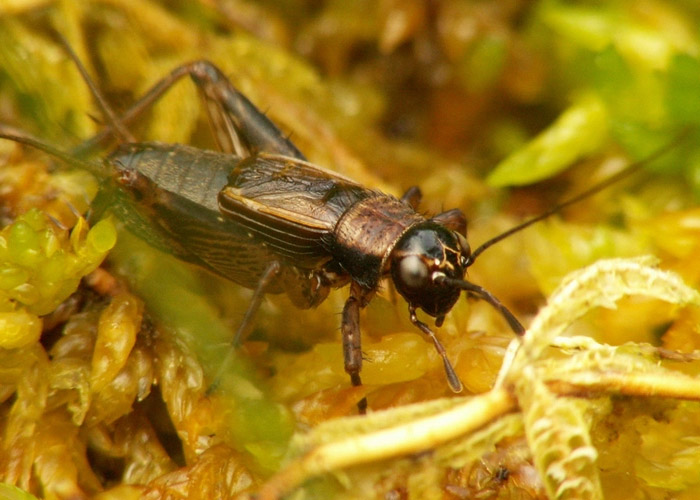 A Naturalist in the Garden

Crickets’ chorus is one of the most well-loved summer soundtracks. But do these animals only sing during this season? And are there any “silent” crickets? Eva Monteiro, researcher at the Biodiversity Stations Network and at Tagis , -the Centre for the Conservation of Butterflies in Portugal, helps you to become an expert on these charming insects.

There are about 30 species of crickets in Portugal. The hind legs of these insects are adapted to allow them to hop, their long antennae resemble thread (known as filiform) and their flattened body is either black or brown. They belong to the superfamily Gryllidae.

The sound we hear, especially at night, is made when crickets rub their forewings together. Only male adult crickets stridulate (the technical name for when insects “sing”) and they do this during the copulatory courtship to attract the female.

This “chirp” is typically heard at this time of year. Two-spoted crickets (Gryllus bimaculatus) and Italian crickets are some of the summer night chirpers. “There are two species in Portugal, both are excellent singers (Oecanthus pellucens and O. dulcisonans). At first glance, Italian crickets look like small straw-coloured cockroaches but when we hear the males chirp it’s impressive! How can an animal that is just over a centimetre long, make so much noise? ”comments Eva Monteiro, impressed.

Furthermore, each species of cricket has a different, characteristic song. Therefore, experts are able to identify the species just by the sound it makes. Similar to birds.

But do crickets chirp more in the summer?

Eva Monteiro is not entirely sure if there are more species chirping now. “Perhaps people are more attentive at this time of year because they have more free time and the mild nights invite one to spend more time outdoors.” The expert also explains that “the time when crickets chirp is related to their life cycle and when they reach adulthood”.

That’s why crickets can be heard throughout the year except, perhaps, during the coldest months.

“In spring, there are the European field cricket (Gryllus campestris), the most famous species that nest in slightly humid meadows. Males chirp at the nest entrance to attract females, using it as a sounding board, creating lovely symphonies. Although it isn’t easy, it is possible to find nests in these meadows, where hundreds of individuals chirp. A tip: look out for small semicircle cleared areas at the nest entrance.”

Others that also chirp in seasons other than the summer, are mole crickets (Gryllotalpa sp.). As they are burrowing  insects and because it is easier to make galleries in wet soil, it is common to hear their low and continuous chirps after the first rains of spring and autumn.

“There are also crickets that sing throughout the year, such as the Wood cricket (Nemobius sylvestris), the Reed cricket (Natula averni) and the Bordeaux cricket (Eumodicogryllus bordigalensis)”, adds Eva Monteiro. “The latter, in addition to chirping throughout all seasons, also chirps at all the main and secondary stations! It lives in both rural and urban habitats, especially enjoying cracks, so the gravel between the train tracks is an excellent habitat.”

Crickets are usually heard at night because they are nocturnal. Nevertheless, “there are some species that are active during the day, such as the Field cricket, which is mainly diurnal, or the Bordeaux cricket that is active both during the day and at night.”

Another curious thing about these “chirpers” is that some are louder than others. The Reed, Field, Bimaculated and Italian crickets are all strident chirpers and very audible to the human ear. “The Bordeaux cricket chirp is deeper and lower but if you pay attention you may hear it next time you take a train. The Forest cricket chirp is little more than a hesitant murmur that reminds us of the sound of the dead leaves on which it lives ”.

But do all crickets chirp or are there “silent” crickets?

“In fact, there are crickets that don’t chirp”, replies Eva Monteiro. “Such is the case, for example, of the curious Sword-tail cricket (Trigonidium cicindeloides), a small cricket that looks like a beetle and lives near wetlands. Or some species where the front wings are completely absent. ”

Every month, throughout the year, Wilder magazine unveils some of the phenomena taking place in the Gulbenkian Garden and in the natural world.