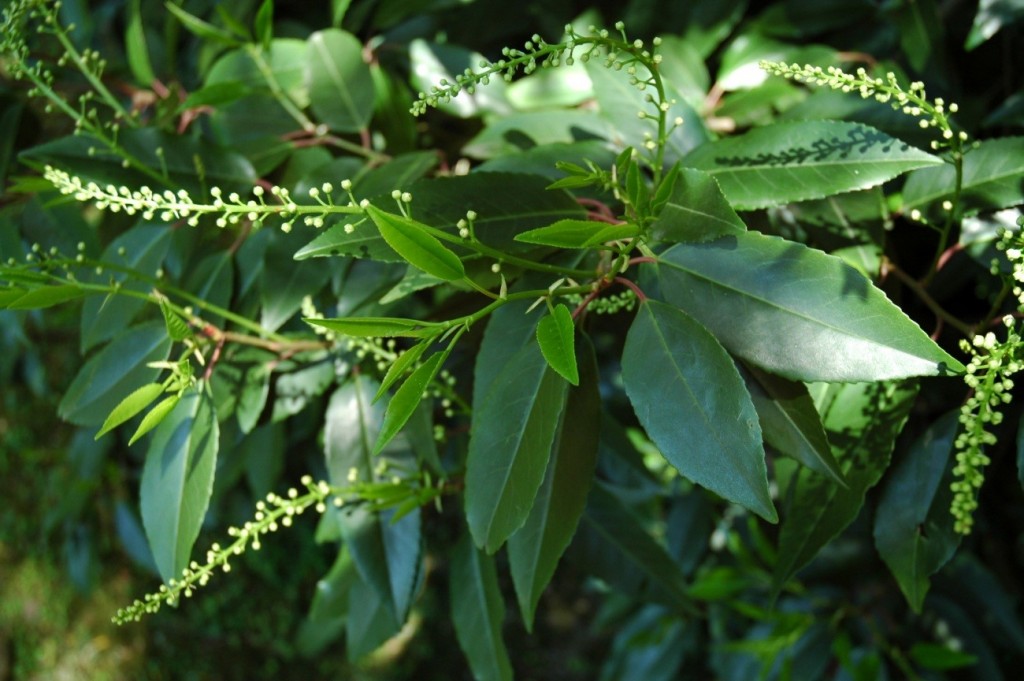 From the Rosaceae family, Prunus genus, the Portugal laurel is related to the cherry and many other fruit trees.

This is an evergreen shrub (or small tree) that is typically 15 to 20 m tall. Densely branched, it has a black and smooth bark and deep red branches.

The leaves are simple, alternate, 8 to 14 centimetres long, ovate to oblong, coriaceous, acute apex and a dentate margin; yellowish on the underside and dark green glossy on the upper surface.

The flowers are whitish, produced on erect dense racemes, 15-25cm long. They usually appear between May and July.

The fruits are small cherry-like drupes, with a size of between 8 and 13 millimetres. It matures in late summer, turning dark purple. The fruits are bitter, rough and not edible.

The Portugal laurel, is a species of cherry tree native to Portugal and Macaronesia, Spain, Morocco and France.

This species exists in the wild in the Iberian Peninsula and in isolated parts of Southwest France and the north of Morocco. It prefers fresh and humid places with oceanic influence.

The autochthonous subspecies of continental Portugal is subsp. lusitanica. Other subspecies (subsp. Azorica and subsp. Hixa) exist in the Azores and Madeira.

It inhabits relict woods in the mountains, in siliceous terrains. It is considered an endemic plant of the Iberian Peninsula that can be found, in the wild, in the regions of Beiras, Minho, Trás-os-Montes, the Azores and Madeira. It exists also in the French Pays Basque.

The Portugal laurel is considered a relic of the “laurisilva”, the semitropical relict flora that survived the Ice Age, mainly in the Islands of Macaronesia.

It is not considered threatened but the subspecies of the Azores and Madeira are protected.

Its wood has been used in Portugal in the manufacture of small objects.

Its fruit is appreciated by birds that consume and defecate the seeds, aiding the plant’s dissemination.