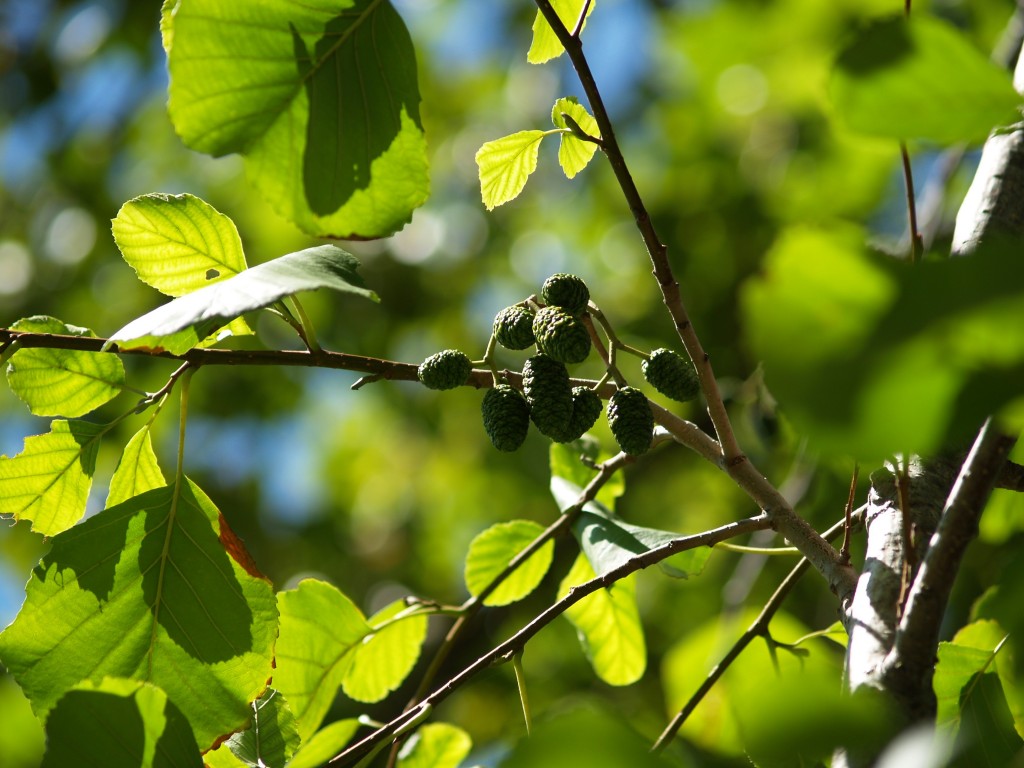 From the Alnus genus, Betulaceae family, the alder is a deciduous tree. It is a medium- sized, short-lived tree, growing to a height of up to 25 meters. It rarely exceeds 120 years of age.

With an upright trunk, it has a dense conical shaped top, sharp apex when young, which becomes rounded and irregular with age. Its branches are sinuous and its bark is gray-brown.

The leaves are alternate, rounded, with a serrated margin, 4 to 10 centimetres long, glossy dark green upper surface and paler green underside, with yellow hairs in the angles of the veins.

The leaves and buds are viscous when young, as the name glutinosa suggests.

It is a monoecious species – with male and female flowers on the same plant. The inflorescences begin their development in the fall and complete it the following spring. The male flowers form cylindrical and long, pendant catkins which fall off when all their pollen is completely released. Female inflorescences are purple-red when young, forming small ovoid catkins in groups of three. They remain on the branches after fertilization takes place, turning into small woody cones that contain the seeds. The fruiting is regular and abundant. The fruits are ovoid, very viscous, purplish brown.

The common alder is native to almost the whole of continental Europe, West Asia and North Africa, it is a spontaneous tree in Portugal. Its natural habitat is temperate humid forests, margins of watercourses, plains and low mountains up to an altitude of 1200 m. In Portugal, this alder can be found throughout the country with prevalence in the north and centre. It grows in areas of humid temperate climate, particularly along the waterways.

As with some other trees growing near water, the common alder keeps its leaves longer than trees in drier situations, remaining green late into the autumn.

The common alder forms symbioses (relations of mutual benefit) with the actinomycetes – bacteria in the soil that have the capacity to capture nitrogen in the air. All the species of this genus have nodules in the roots, formed by these nitrogen-fixing bacteria which create a soil rich in nitrogen.

It is a tree that needs plenty light, being one of the main constituents of the riparian forests. It requires soil rich in moisture, preferably acidic, poor in limestone and of medium-compact texture.

This tree produces light and homogeneous coloured wood, which, under the action of air, after cutting, can tend to red. Its low density and water resistant wood is widely used in the construction of guitars, because of its special acoustic characteristics. This wood is also used in the construction of furniture and in the smoking of raw and dry fish. Under water the wood is very durable and is used for deep foundations of buildings.

It has fast growth but poor longevity, and is resistant to cold.

It is propagated by seed, stake or by plunging, also by the broom.

It is a species resistant to urban pollution, used as a pioneer species in the afforestation of quaggy terrain and in the constitution of hedges. Its roots prevent the erosion of the water courses banks, setting the ground, avoiding the construction of more artificial structures, besides sheltering the fauna characteristics of these ecosystems and providing it with food (its seeds are a useful winter food for birds) and allowing the thriving of other spontaneous species.

In addition to its varied medicinal properties, its bark is used for the extraction of brown and orange pigment that can be used in the dyeing of wool, cotton and silk. Other parts of the plant are also used as dye, producing other colours.