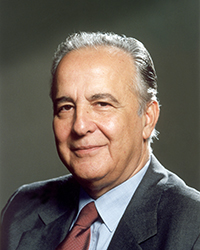 Trustee of the Calouste Gulbenkian Foundation from 1969 to 1974 and from 1977 to 1998 holding responsibility for the Museum, Health and Social Protection.

Vítor Augusto Nunes de Sá Machado took over as President of the Board of Trustees. During his mandate as President, from 1998 to 2002, he sought to humanise the role of the Foundation in Portuguese society and Portuguese language speaking countries, attempting to reach out to the disadvantaged and those without voices in society. He was Director of the Gulbenkian Foundation’s Overseas Services, Trustee of Companhia Nacional de Petróleos and Vice-president of Partex and also responsible for the staging of the exhibition Only the Best: Masterpieces of the Calouste Gulbenkian Museum, Lisbon at the Metropolitan Museum of Art in New York. This greatly emblematic exhibition welcomed in the region of 1.5 million visitors.

He participated in various international conferences and meetings and published A candidatura à UNESCO e a política externa portuguesa. He was honoured with various national and international awards, including the Grand Cross of the Order of Prince Henry of Portugal in 1981.