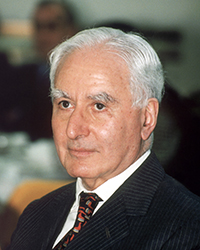 Mikhael Essayan (1927 – 2012), was Calouste Gulbenkian’s grandson. His mother, Rita Sirvarte Essayan, was Gulbenkian’s daughter and married Kevork Loris Essayan. He married Geraldine St. Lawrence Lee Guinness in 1956, together they had a son and a daughter.

Mikhael Essayan attended Harrow School and later Balliol College, Oxford, where he obtained a First Class Degree in Classical Honour Moderations and “Literae Humaniores”, followed by an M.A. The Armenian National Academy of Sciences also conferred a Doctorate Honoris Causa to him.

Many commendations were awarded to Mikhael Essayan including, the Order of Merit of Portugal (Commander), the Order of Prince of Cilicia (Lebanon), and the Great Cross of the Infante D. Henrique (Portugal).