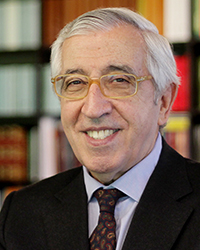 Sitting on the General Consultancy Board of the Calouste Gulbenkian Foundation between 1995 and 2002, he subsequently became non-executive Foundation Director (2002 – 2012) and President of its Board of Directors between 2012 and 2017.

During his mandate as President, Artur Eduardo Brochado dos Santos Silva promoted the drafting of long term plans for the Music Service, the Gulbenkian Museum and the Gulbenkian Institute of Science; establishing Consultancy Boards for all Programs and the core areas of Foundation intervention. He also launched or backed the staging of studies and conferences on social, economic and financial themes as well as on European and national policies (in the latter case, especially emphasising research, education, healthcare and investment); backing the staging of an exhibition of Amadeo de Souza-Cardoso at the Grand Palais in Paris; supporting the renovation of the Grand Auditorium as well as a major retrospective of Almada Negreiros.