All of these European powers had their eyes on parts of the Ottoman Empire, and many had already appropriated large chunks of territory for themselves. Gulbenkian’s role in founding the National Bank of Turkey, following the Young Turk Revolution (1908), was to establish a truly international source of financing for the Ottoman Empire’s modernisation, including the development of its oil reserves and other natural resources.

In early 1914 the Turkish Petroleum Company was reorganised. Royal Dutch-Shell’s great rival, the Anglo-Persian Oil Company (now BP) had a rival claim to the Al-Jazeera oil concession, and, more importantly, strong support from the British Foreign Office. In order to accommodate Anglo-Persian Gulbenkian agreed to reduce his share from 15% to 5%. A few months later World War I broke out, however, and TPC was left in a state of suspended animation. 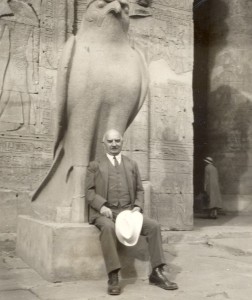 World War I brought the final dissolution of the Ottoman Empire, and led to Deutsche Bank’s 25% of TPC being transferred to a French company specially created for the purpose, the Compagnie Française des Pétroles (CFP, now Total). The French had been slow to realize the strategic importance of oil, and Gulbenkian continued to coach the French authorities as well as CFP on how to handle their rivals. Meanwhile the oil-rich lands of Al-Jazeera ended up within the new British mandate of Iraq, from whom the TPC secured a concession in 1925.

Motivated partly by respect for national self-determination and partly by self-interest, the United States was determined to draw a line under the quasi-imperial pre-1914 system by which the Middle East had been divided up by Britain, France, Russia and other powers into “spheres of interest.” Each power sought to keep foreign companies out of “their” sphere. Gulbenkian again played a decisive role in the negotiations which led to an American consortium joining TPC under the so-called “Red Line Agreement” of 1928. The famous line marked the borders of the former Ottoman Empire; the signatories to the agreement agreed not to operate within the red line area other than through their joint venture, TPC. Calouste Gulbenkian had ensured that the great powers would act together in an ordered manner, and had managed to preserve his 5% shareholding. Although he continued to seek new international partnerships, notably between France, Persia and the Soviet Union, the “Red Line” was his greatest achievement.

His persistence, business talent, and flexibility to accommodate new interests and adapt to new situations earned him considerable respect among industry insiders. Titans of the oil industry all recognized Gulbenkian’s probity and straight-dealing. The rest of the world knew him simply as Mr. Five Percent, one of the world’s richest men.