Drawings: Between Art and Science

During 3 weeks in May 2009, Marta de Menezes and Lucy Lyons spent their time at the IGC with their drawing material, deepening their understanding of the scientific research and drawing different experiences in the laboratories. 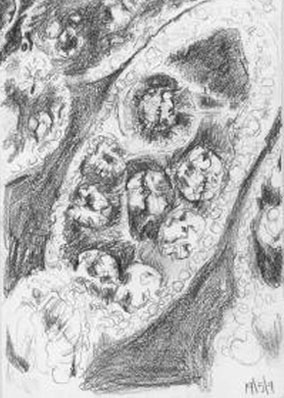 Working in collaboration with scientists, the work produced during the residency was encouraged to develop freely allowing dialogue between scientist and artist to flourish. The intention was to reveal the importance of drawing as an investigative tool, and also the depth of involvement and the experimentation of the artists in making and producing a work of art.

Artworks created aimed to reflect the input from the scientific research being undertaken and reveal the connections made between all those working on the project. The subject areas investigated were:

In the afternoons the exhibition space at the Fábrica Braço de Prata was used as an open studio where they developed work made in the laboratories. There, the public and visitors cold contribute their ideas to the artists.