Two Upcoming International Conferences in the USA and Armenia

The Armenian Communities Department is happy to be partnering with important Armenian research institutions and universities in supporting two significant international conferences focusing on contemporary Armenian issues, one in the United States and the other in Armenia. 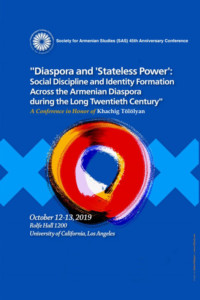 The first conference, “Diaspora and ‘Stateless Power’: Social Discipline and Identity Formation across the Armenian Diaspora during the Long twentieth century” will take place on 12-13 October 2019, at the Rolfe Hall 1200 University of California, Los Angeles. The discussions will foster new insights into understanding the Armenian Diaspora and analyse the influence of non-state forms of power and governance. The conference will honour Professor Khachig Tololyan and his pioneering work in diaspora studies. It will include a panel on the Armenia Diaspora Survey research project funded by the Calouste Gulbenkian Foundation. The full conference programme can be consulted here.

The second international conference, “Armenia’s Transformation in a Comparative Context: Restarting Democratization?” will take place 14-15 November 2019 at the Manoogian Hall, PAB, at the American University of Armenia (AUA). One year after the 2018 “Velvet Revolution,” this conference will bring various scholars together to debate the monumental changes that have taken place in Armenia.  What has Armenia achieved and what are the challenges ahead? How does Armenia compare to other countries that experienced massive anti-government protests that did or did not result in sudden government changes? The goal is to critically reflect on the Armenian developments and to place them in the broader context of similar events worldwide.

The Armenian Communities Department’s support to these two conferences is part of its wider strategy to encourage Armenian studies globally, with particular focus on contemporary issues and critical research-based approaches.  Other initiatives include our scholarship programme for university students and academic researchers, support to academic publications, research projects on language, translations into and from Armenian, as well as research project grants